Topic Progress:
← Back to Lesson

Our strummed version of the intro is shown in the tab below. This section repeats twice before moving on to the main verse. The second repeat has a slightly different ending, which we will cover on the next page in Part 2.

If you look at the tab, you will see some familiar and some unfamiliar elements. The

Lastly, we can see symbols for stroke direction above the guitar tab stave:

indicates a downstroke, and

For our repeated measures, you might notice the following notation above measure 2:

This notation above measure 3:

And this notation above measure 4:

These are called additional endings and they are used when we have a repeating section, but we wish to have a different ending for each repeat. This type of notation allows us to write repeated sections on our guitar tab, without having to rewrite the full thing each time – we only need to add the bits which change. If we were to write this passage without our repeated sections and additional endings, this particular piece of tab would be 4 times as long – just think how long the tab for a full song would be if we didn’t have methods like this to reduce the amount of tab!

Referring back to our guitar tab, we can see that the section is repeated 4 times (note the 4x symbol at the end of measure 3):

The first additional ending tells us to use measure 2 as the ending for the first two repeats, giving us an Em – G chord progression:

The second additional ending tells us to use measure 3 as the ending for the third repeat, giving us an Em – A chord progression:

The third additional ending tells us to use measure 4 as the ending for the fourth repeat, which gives us another Em – A chord progression. Once this final repeat has been played, we then go on two play measures 5 and 6, where we play the G major chord. 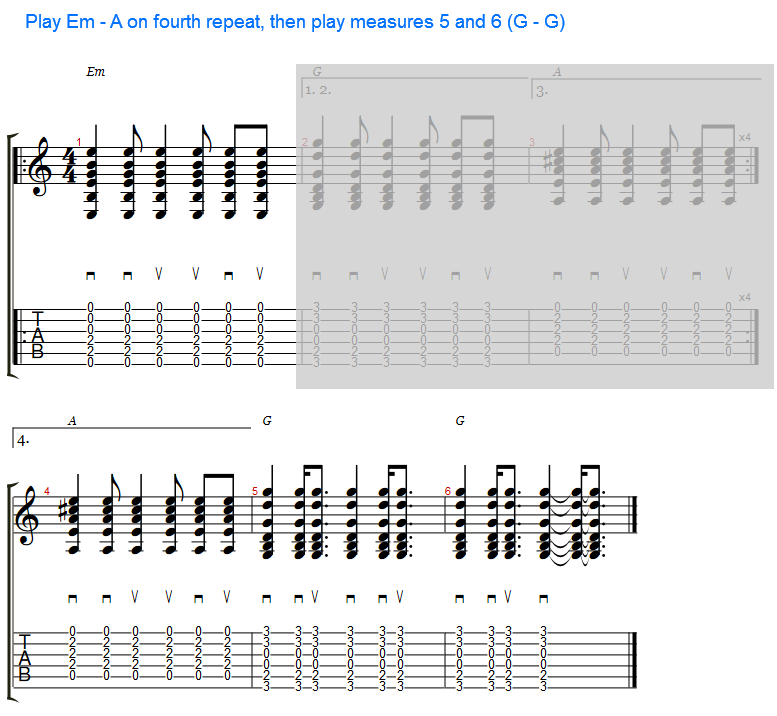 For measures 1 to 4, we will be using the strumming pattern we used for our previous lessons, i.e. we will miss the first upstroke and the third downstroke. As before, we will practice our chord changes first before we attempt playing the song.

Chord Change – Em to A

If you look at the example below, we have a G chord played in quarter notes, in eighth notes, then in sixteenth notes. Notice how we are basically just doubling our strumming speed when we move from quarter, to eighth, to sixteenth note strumming.

For the final section of our Pink Floyd chord progression, we’ll play a quarter note strum, followed by a sixteenth note strum, as follows:

If you’re comfortable with your chord changes, you can practice playing the first part of the intro to the song. To sum things up, we’ll play the following:

Tip 1: Open string strums. Remember, if you are struggling with your chord changes, you can use the open string strum technique on the last upstroke before you change to the next chord. To use this technique, take your fingers off the fretboard on the last upstroke, and strum the open strings. This will give you extra time to move your fingers to the next chord shape, making your chord changes sound smoother.
Tip 2: Muted strumming practice. You can also practice your strumming patterns without the chord changes by muting the strings on the fretboard. Lightly place your fretting hand across all of the strings near the top of the guitar neck, then use your strumming hand to practice playing the strumming patterns.